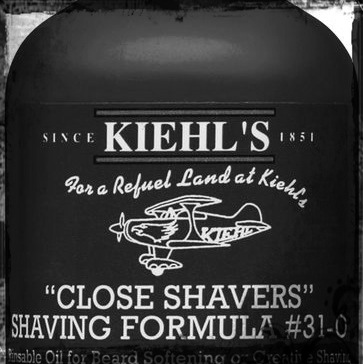 . .It's always difficult to talk about Kiehl's because I am a huge fan of the brand at the point of taking advantage of my last move to throw away almost all other brands. Imagine my anxiety when girls told me that: 1. Kiehl's opens Rue des Martyrs in Paris a new shop with a barber; 2. And they want to invite me to shave. Past the stage where I feel like Carine R. or Anna W, ultra important personality type which WE MUST HAVE THE OPINION OTHERWISE WE'LL DIE  NOW ! I get to the point where I tell myself it will be complicated. Complicated because if I love it you you will  think I play the flute (vision of Anna W. playing the flute in a barber Rue des Martyrs. We love) and if I do not like too much hassle I'm going by lack of objectivity. So I decided to take the problem from a single axis: I'll tell you the WHOLE truth about the shaving. We start the day before, where I quietly get drunk with my fiance, my best friend Lulu and Aurélie a young and pretty girl. We ended tranquillou at le Baron drinking Barons  alternating with Red Bull vodkas for not having a loss of energy, eh ! The awakening was  late and hard ... Hard ... The idea of ​​going to shave me raised me slight nausea but when gotta go gotta go ... I mount on my scooter, I get lost 17 times between the 9th and 10th I know normally quite well because I live there !  I landed rue des Martyrs, hangovered & long beard of 15 days. And there, sorry but it was super cool. But really nice. I have already wrote about Barbier Dolce & Gabbana in Milan. Tradition and luxury atmosphere. Forget ! Push the door of Kiehl's and ding you're in New York. Not a stuck neighborhood but something cool like East Village or Nolita ! You are greeted by an odd couple. Yeah, funny because I'm not sure that without Kiehl's Valerie, Director of the shop and Armand, the barber, not ever met. And it would have been a pity. Imagine, a woman very Saint Laurent (it comes from there, I asked discretly) with an hallucinating knowledge of skin products . A kind of elegance very 80's (which I love to 200%) in the spoken ... And Armand, hair studio (room Vogue, Numéro, Grazia blablabla) hyper cool with his small Ray Ban, its badges "I ♥ Kiel's "on his chinos who tells you his life, his anecdotes but without falling into the trip of gossip fashion studio (pronounced fashionnnnn studioooo). At times I thought of Guy Bourdin (over St. Laurent). Ethyl remnants of the previous day probably. Well obviously, you shave in the middle of the store. Obviously the hot towel is not too hot. But we don't bother. I felt like being at my Russian Barbier on 23rd Street. Again there are people around me. The hot towel / not hot we pass under the hot water and voila! It make it. And honestly, I spent an hour pampering me. A chat with nice people, to explain that I had a Kurdish terrorist beard that I could not discipline (I'm right in the trip: I want a real man's beard bushy, ok?) ... And  the little Armand (it is not little but it works in this post), I was completely cut the beard with scissors (very very rare and still top notch). As a real barber, I was (still with scissors) "refreshed" the contour of the ears. A little help from Herbal Toner explaining to me that Andy Warhol used it (=> we like it) and Brad Pitt now use it (=> we do not care). Oh yeah and at one point, he uses before & after shaving, a great thing that I did not know. A shaving oil that smells so good ! He even found a way to tame my beard ... So then I say world champion Armand! With my favorite product for hair, I say ===> "Cream with Silk Groom"! And it does. I no longer look like Ben Laden! My fiancé & Lulu loved my beard trimmed ! And then I'm happy. So go ahead! I leave you because I have to pick up a plane. I have a cocktail for 20 years of Louboutin at the Design Museum in London tonight. I come back tomorrow. I know it's been Nazos but it's true and I'm not too excited to tell you about it! And then we said, ALL THE TRUTH Kiehl's 13 rue des Martyrs 75009 Paris Barber three days a week
publié le Thursday 2 May 2013 ● Our Good Adresses
1 commentaire
ajouter un commentaire
commenter